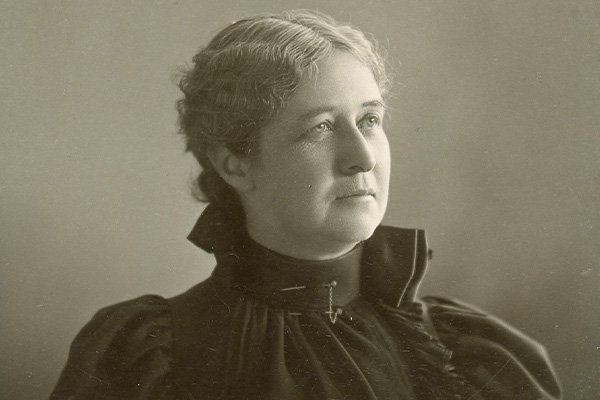 One of the longest-serving librarians in the history of a public library in La Porte was Jennie B. Jessup. She started as a librarian with the La Porte Library and Natural History Association in 1894 and continued with them through and after the change to a free public library in April 1897. After her resignation in August 1897, she left for 3 ½ years when she went to Boise, Idaho and Greenfield, Indiana to catalog and organize their libraries. Then she was asked to come back to the public library in La Porte, and she accepted the librarian position there again.

Jennie was born in New Durham Township, La Porte County, Indiana, on March 30, 1853, to Irwin S. and Elizabeth (Taylor) Jessup. Her education was at the Miss Julia Howell’s School for Girls in La Porte and at Mrs. Holmes’ Seminary at Michigan Avenue and Harrison Street in La Porte. She had been employed in the office of Dr. Dakin, a La Porte physician, prior to her library work. She resigned as head librarian in September 1923 for health reasons but remained as a member of the staff until October 31, 1932.

During her tenure, the library changed from its location at 805 Maple Avenue where a wrought iron fence surrounded the building “to keep the cows out” to the newly constructed building funded with a Carnegie grant in 1920. During World War I, the library gathered and sent 1,000 volumes to the front. According to a 1916 publication of the Indiana State Historical Commission, she was a member of the commission’s Indiana State Advisory Committee. She was given the task of selecting items to place in the cornerstone of the new La Porte High School building which was laid on June 23, 1923.

She died on February 26, 1934, at age 80 in the Ruth C. Sabin Home in La Porte of complications from advanced age. The La Porte Chapter of the Eastern Star conducted the rites. She was buried in Pine Lake Cemetery and the Cutler Brothers were in charge of arrangements.