Why Audiobooks are Fantastic 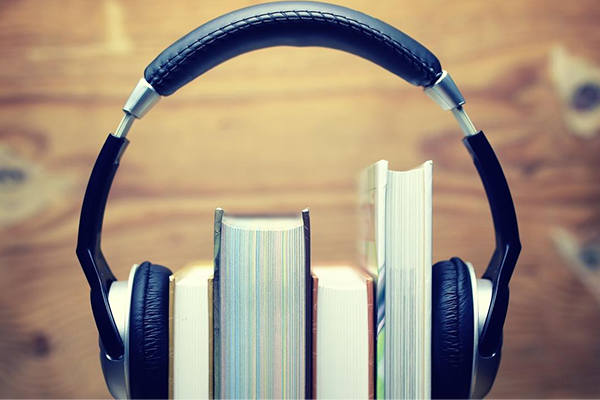 Audiobooks have been around for a couple of decades, and you have probably heard of them by now. They’re books that are read to you by a narrator instead of reading the text yourself. LPCPL has books on CD, Playaway, and digital versions of many audiobooks. Digital eAudiobooks can be accessed for free through the Libby or OverDrive app. While many of us are spending a lot of time inside and practicing social distancing, now is a great opportunity to explore the wonderful world of audiobooks.

Like traditional books, you can sit down in a comfy chair and give an audiobook your undivided attention. But unlike traditional books, you also have the option to listen to audiobooks while multitasking. You can put one on while doing chores like dishes, folding laundry, or cleaning your bathroom or kitchen. While you may not be traveling much these days, you can look forward to enjoying an audiobook during a long commute or road trip and being entertained the whole way to your destination! Best of all, you don’t need an internet connection to listen to eAudiobooks on the Libby or OverDrive app. Books are available for streaming or download through the apps. Don’t worry if you zone out and miss some of the story, either. Libby and OverDrive have a rewind feature so you can go back if you need to.

While we understand that reading a physical book is a wonderfully unique experience, some books are even better as audiobooks! Excellent audiobooks take special care to bring a story to life, adding extra dimensions like separate voices for characters, or a large number of narrators for a cast of characters, or sound effects to make the story as vivid as it can be. Narrators can be celebrities, professional voice actors, or even the authors themselves. Sometimes the narrators will narrate books from one author or genre, other times they will have a wide variety of work from children’s books to adult thrillers. Some people even choose to listen to audiobooks based on the narrator rather than giving much weight to the author of the story, highlighting the difference a good narrator can make for a book.

You don’t have to visit the library to access audiobooks. We have digital versions of many audiobook titles on our Libby and OverDrive apps, which you can download here. A quick note about the difference between Libby and Overdrive: both apps are by the same company and basically do the same things. The Libby app is the newer, more user-friendly version of the OverDrive app. Both apps work on most devices, although Libby doesn’t work with Kindle Fire devices.

eBooks and eAudiobooks can be read and listened to on your computer, laptop, smartphone, or tablet through these apps. You will just need to sign in with your library card and PIN. If you don’t know your pin, give us a call at 219-362-6156 or email us at help@laportelibrary.org. If you don’t have a library card you can sign up for a temporary online borrower card until you can come to a library branch in person. If you can’t find an eAudiobook title you would like in our collection, send us a recommendation in the app.

Great Audiobooks to Get Started With:

If you want specific audiobook titles to get you started, look no further! These 10 audiobooks are great books in their own right, and their narration enhances the experience even more. These titles are all available in eAudiobook format from the Library.

Bossypants by Tina Fey, Narrated by Tina Fey
(Nonfiction, Autobiography, Comedy)
5 hours, 30 minutes
The breakout star of “Saturday Night Live” and “30 Rock” gives a humorous account of her life, as well as behind-the-scenes stories from her hit shows.

Hidden Figures by Margot Lee Shetterly, Narrated by Robin Miles
(Nonfiction, History)
10 hours, 47 minutes
Before John Glenn orbited the earth, or Neil Armstrong walked on the moon, a group of dedicated female mathematicians known as “human computers” used pencils, slide rules and adding machines to calculate the numbers that would launch rockets, and astronauts, into space. Among these problem-solvers were a group of exceptionally talented African American women, some of the brightest minds of their generation. Originally relegated to teaching math in the South’s segregated public schools, they were called into service during the labor shortages of World War II, when America’s aeronautics industry was in dire need of anyone who had the right stuff. Suddenly, these overlooked math whizzes had a shot at jobs worthy of their skills, and they answered Uncle Sam’s call, moving to Hampton, Virginia and the fascinating, high-energy world of the Langley Memorial Aeronautical Laboratory. Even as Virginia’s Jim Crow laws required them to be segregated from their white counterparts, the women of Langley’s all-black “West Computing” group helped America achieve one of the things it desired most: a decisive victory over the Soviet Union in the Cold War, and complete domination of the heavens.

Alexander Hamilton by Ron Chernow, Narrated by Scott Brick
(Nonfiction, History)
35 hours, 58 minutes
The inspiration for the hit Broadway musical Hamilton! In the first full-length biography of Alexander Hamilton in decades, National Book Award winner Ron Chernow tells the riveting story of a man who overcame all odds to shape, inspire, and scandalize the newborn America.

To Kill a Mockingbird by Harper Lee, Narrated by Sissy Spacek
(Realistic Fiction, Drama, Tragedy)
12 hours,17 minutes
In this American classic, a young girl growing up in an Alabama town in the 1930s learns of injustice and violence when her father, a lawyer, defends a black man falsely accused of assaulting a white girl.

The Ocean at the End of the Lane by Neil Gaiman, Narrated by Neil Gaiman
(Fantasy, Mystery)
5 hours, 48 minutes
A middle-aged man returns to his childhood home and is drawn to the farm at the end of the road where, when he was seven, he encountered a most remarkable girl and her mother and grandmother. As he sits by the pond behind the ramshackle old house, the unremembered past comes flooding back — a past too strange, too frightening, too dangerous to have happened to anyone, let alone a small boy.

Harry Potter Series by J.K. Rowling, Narrated by Jim Dale
(Fantasy, Series)
8 to 21 hours, depending on the book in the series
This classic series also has an acclaimed audiobook adaptation that will wow listeners as they are regaled with the adventures of Harry Potter, a young orphan who discovers he is a wizard and is sent to Hogwarts, the premier school of witchcraft and wizardry.

Children of Blood and Bone by Toni Adeyemi, Narrated by Bahni Turpin
(Fantasy, Drama, Young Adult, Book 1 in a series)
17 hours, 44 minutes
They killed my mother. They took our magic. They tried to bury us. Now we rise. Zélie Adebola remembers when the soil of Orïsha hummed with magic. Burners ignited flames, Tiders beckoned waves, and Zélie’s Reaper mother summoned forth souls. But everything changed the night magic disappeared. Under the orders of a ruthless king, maji were killed, leaving Zélie without a mother and her people without hope. Now Zélie has one chance to bring back magic and strike against the monarchy. With the help of a rogue princess, Zélie must outwit and outrun the crown prince, who is hell-bent on eradicating magic for good. Danger lurks in Orïsha, where snow leoponaires prowl and vengeful spirits wait in the waters. Yet the greatest danger may be Zélie herself as she struggles to control her powers—and her growing feelings for an enemy.

Ready Player One by Ernest Cline, Narrated by Will Wheaton
(Science Fiction, Drama)
15 hours, 40 minutes
It’s the year 2044, and the real world is an ugly place. Like most of humanity, Wade Watts escapes his grim surroundings by spending his waking hours jacked into the OASIS, a sprawling virtual utopia that lets you be anything you want to be, a place where you can live and play and fall in love on any of ten thousand planets. And like most of humanity, Wade dreams of being the one to discover the ultimate lottery ticket that lies concealed within this virtual world. For somewhere inside this giant networked playground, OASIS creator James Halliday has hidden a series of fiendish puzzles that will yield massive fortune and remarkable power to whoever can unlock them. For years, millions have struggled fruitlessly to attain this prize, knowing only that Hallidays riddles are based in the pop culture he loved that of the late twentieth century. And for years, millions have found in this quest another means of escape, retreating into happy, obsessive study of Hallidays icons. Like many of his contemporaries, Wade is as comfortable debating the finer points of John Hughess oeuvre, playing Pac-Man, or reciting Devo lyrics as he is scrounging power to run his OASIS rig. And then Wade stumbles upon the first puzzle. Suddenly the whole world is watching, and thousands of competitors join the huntamong them certain powerful players who are willing to commit very real murder to beat Wade to this prize.

Hitchhiker’s Guide to the Galaxy by Douglas Adams, Narrated by Stephen Fry
(Science Fiction, Comedy, Book 1 in a series)
5 hours, 51 minutes
Seconds before Earth is destroyed to make room for a galactic freeway, a young man is rescued by an alien friend who whisks him away on a space-traveling adventure.
Great Audiobook Narrators to Get Started With:

If you would rather browse eAudiobooks by narrator instead of title, author, or genre, here are 10 fantastic names to get you started. These narrators are known for bringing characters and stories to life, nailing characterization and emotion in scenes. Some narrators have narrated over one hundred books, meaning that you can have hundreds of excellent books to choose from depending on the narrator. You can search for a narrator by name in the online catalog, the same way you would search for an author.