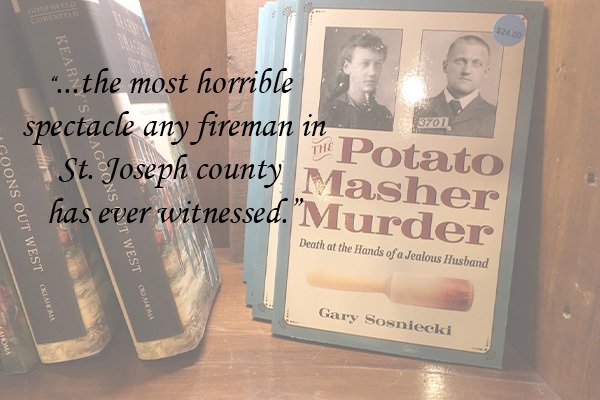 Join author Gary Sosniecki, author of “The Potato Masher Murder” for this virtual author talk on Tuesday, October 13 at 6:00pm. The book details the shocking murder of the author’s great grandmother, Cecilia Ludwig, by her husband in Mishawaka in 1906.

“Albin Ludwig was furious. He had caught his wife, Cecilia, with other men before; now, after secretly following Cecilia one evening in 1906, Albin was overcome with suspicion. Albin and Cecilia quarreled that night and again the next day. Prosecutors later claimed that the final quarrel ended when Albin knocked Cecilia unconscious with a wooden potato masher, doused her with a flammable liquid, lit her on fire, and left her to burn to death. Albin claimed self-defense, but he was convicted of second-degree murder.”

Mr. Sosniecki will talk about the book for 30 minutes and will take questions after. This program will be great for true crime fans and Indiana history buffs. Check out the book before the talk at LPCPL! Read more on the author’s Facebook page and the publisher’s page.