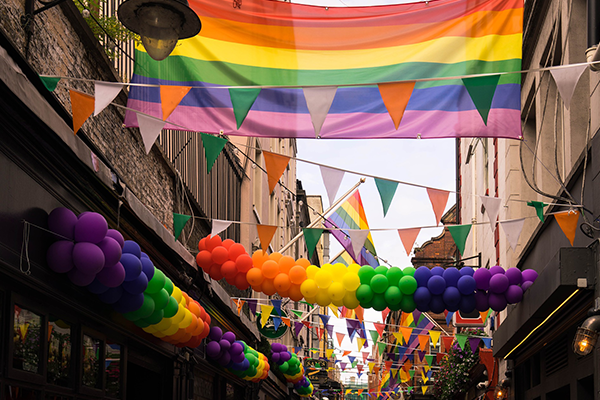 You’re probably familiar with the festivities that come with Pride today, such as parades, floats, and festivals. Did you know that it didn’t start out this way? The first Pride “parades” were actually marches in order for the LGBTQ+ community to be more visible and to commemorate the one year anniversary of the Stonewall Riots. These riots occurred at the Stonewall Inn in New York City on June 28, 1968, when police raided the building. This was a time where police could arrest someone for being part of the LGBTQ+ community. The patrons fought back and demanded civil rights. The Stonewall Riots lasted for six days and are considered the turning point for LGBTQ+ rights.1

The first march took place in Chicago on June 27, 1970, where about 150 people marched. On June 28, 1970, the first anniversary of Stonewall, New York City, Los Angeles, and San Francisco all held marches. All of these marches were very different from what they are today. There were no floats or music or parties; these marches were a statement that the LGBTQ+ community was here and would not be invisible anymore. Many parades are still held on the last weekend in June to honor the Stonewall Riots, but events are spread throughout the month as well.

Here are some items in our collection at all age levels for you to learn more about the history of LGBTQ+ rights:

Pride : Fifty Years of Parades and Protests From the Photo Archives of The New York Times edited by Samantha Weiner

As gay rights in both America and the world have evolved, this book also tells the story of the ever-changing culture of a people.

A joyful celebration of the LGBTQ+ community’s development, history, and culture, packed with facts, trivia, timelines, and charts, and featuring 100 full-color illustrations.

The Gay Revolution: The Story of the Struggle written by Lillian Faderman

Faderman discusses the protests in the 1960s; the counter reaction of the 1970s and early 1980s; the decimated but united community during the AIDS epidemic; and the current hurdles for the right to marriage equality.

The Stonewall Riots: The Fight for LGBT Rights written by Tristan Poehlmann

The Stonewall Riots discusses how in 1969, lesbian, gay, bisexual, and transgender people stood up for their rights against a society that criminalized their natural feelings, launching a movement whose legacy continues to this day.

Gay and Lesbian History for Kids : The Century-long Struggle for LGBT Rights, with 21 Activities written by Jerome Pohlen

The history is told through personal stories and firsthand accounts of the movement’s key events, like the 1950s “Lavender Scare,” the Stonewall Inn uprising, and the AIDS crisis.

BALLOT MEASURE 9 is the chilling true story of the unprecedented violence unleashed by an anti-gay campaign in Oregon, when activists slept with guns under their beds and had full-time police protection.