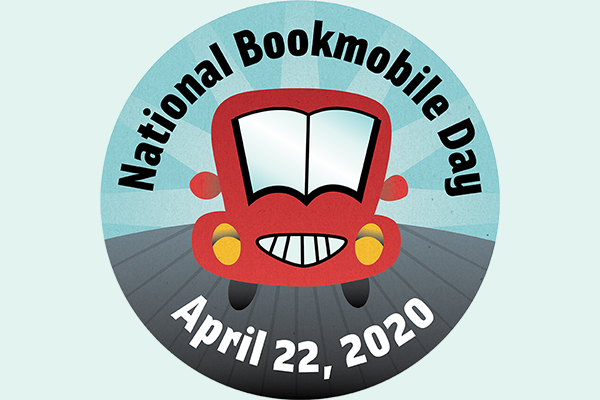 Did you know La Porte County Public Library has been providing Mobile Library services since the 1940’s? The first bookmobile was a small panel truck with the words “La Porte County Library Book Delivery” on the side. At that time, the La Porte County Library had a staff of two. A photo dated 1944 shows Alta Griffith, library employee, and the original vehicle. There was a rear opening in the vehicle so sliding wire trays for the books could be accessed easily. Mrs. Griffith delivered the books to women at their club meetings, usually held in homes or church halls. She would give book reviews, let the members check out their choices, and then have refreshments with them. Just like today’s bookmobile operates on a set schedule, there have been scheduled routes since bookmobile service began. As time went on, stops were added at schools, preschools, apartment complexes, and senior living facilities as well as residential areas. 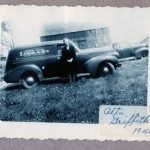 In 1946, a new orange and green three-quarter ton truck started making its rounds. [insert photo or It held 900-1000 books and was named “La Porte County Bookmobile”. People entered from the rear and departed through the front entrance. This vehicle was the first to resemble today’s Mobile Library service. 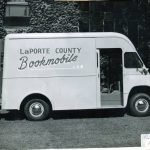 The average lifespan of a bookmobile is 10 years. Every decade or so, the Library continued to upgrade its book delivery vehicles. Here is the timeline:

1979 – A navy blue GMC step-van with automatic transmission converted by Lynn Shelby was purchased. It was named “La Porte County Library Mini Bookmobile”. Because it was smaller than the previous bookmobile, it could go to areas that couldn’t be accessed before. It held up to 1,500 books, magazines and phonograph records. A unique feature was the trumpet horn that was used for announcing its arrival at a stop.

1983 – The next bookmobile was purchased at a cost of $74,000. It got a new blue and yellow paint job in 1991 and had a double capacity.  It was named “La Porte County Public Library Bookmobile”. Believe it or not, this was the first vehicle with both heating and air conditioning units! Previous vehicles were only heated from the engine making it rather uncomfortable for staff and customers alike. This was also the first vehicle with a generator.

1995 – A white vehicle with burgundy and gray stripes was purchased.  It had a Gunman Olson body on a GMC chassis and was made to the specifications planned by the Library. This was the first vehicle to include a wheelchair lift and a back-up camera.

2008 – The new vehicle was called the “Mobile Library” to better reflect the services being provided mobily. Customers could borrow materials available at any LPCPL location from the Mobile Library — making the service just like the Library but on wheels. This vehicle was originally blue with decorative swirls and had a white cab. It was later re-wrapped to include the Library’s multi-color logo.

2020 – A new bookmobile was ordered in 2019 and delivered on March 5, 2020. Like the 1979 bookmobile, this new vehicle is smaller to better accommodate facilities that were inaccessible in a larger vehicle. The Sprinter van style bookmobile, includes solar panels and utilizes battery power in place of a traditional generator improving the customer experience by eliminating exhaust fumes and background noise. Customers will also be able to access the internet wirelessly during Mobile Library stops the same way they would access Wi-Fi at any LPCPL location. 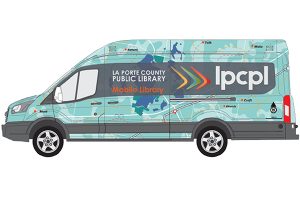 Providing Outreach Services is a long-standing tradition LPCPL is proud to continue offering to the communities we serve. We can’t wait to roll out the new bookmobile and hope to resume Mobile Library and Outreach Services as soon as possible. When a new schedule is available, it will be added to the Library’s calendar of events under Mobile Services.

Toni is the Public Services Manager. She has worked as a customer service team member and outreach librarian at LPCPL. She enjoys spending time with her family, going to the beach, and wearing navy blue. Even though she works at a library, she doesn’t read as much as you might think.