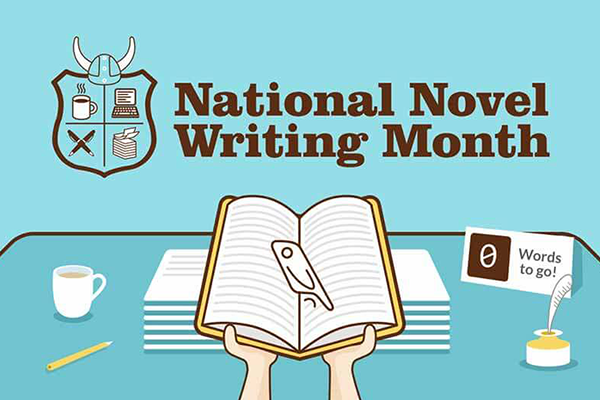 NaNoWriMo, more formally known as the National Novel Writing Month, began in 1999 as a challenge to write 50,000 words of a novel in one month. Every year it begins on November 1, though many people begin planning their story before then with NaNo Prep 101.

If you’re under 18 or a K-12 educator, you can sign up for the Young Writers Program. This program offers tools and assistance to learn the writing process and become a better writer. For everyone else, join this challenge and track your word count online at https://nanowrimo.org/.

Need wi-fi internet? Wi-fi Hotspots are available for check out. Need computer access? Come in and use one of our public computers to write and log your progress. Need a quiet place to work? Reserve a study room at one of our locations. If you need some help getting started with your novel, get inspiration and develop your idea with a Plot Generator, list of Public Domain Characters, or 31 Images of Abandoned Places.

Teens are also welcome at the Calm Before the Storm: A NaNoWriMo Brainstorming Workshop on October 28, 2021. They will work individually and in groups to develop story ideas using online NaNoWriMo resources and worksheets. See our Events Calendar for more information.

In 2020 alone, over 500,000 people tried their hand at beginning a written work. There are hundreds of published books that have their roots in NaNoWriMo, including these:

With the Fire on High by Elizabeth Acevedo

Ever since she got pregnant freshman year, Emoni Santiago’s life has been about doing what has to be done for her daughter and her abuela. The one place she can let all that go is in the kitchen. Even though she dreams of working as a chef after she graduates, Emoni knows that it’s not worth her time to pursue the impossible. Yet once Emoni starts cooking, her only choice is to let her talent break free.

The Wicker King by Kayla Ancrum

August is a misfit with a pyro streak and Jack is a golden boy on the varsity rugby team–but their friendship goes way back. Jack begins to see increasingly vivid hallucinations that take the form of an elaborate fantasy kingdom creeping into the edges of the real world. August decides to help Jack. He accepts the visions as reality, even when Jack leads them on a quest to fulfill a dark prophecy. August and Jack alienate everyone around them as they struggle with their sanity, free falling into the surreal fantasy world.

A Little Something Different by Sandy Hall

Lea and Gabe are in the same creative writing class, they order the same Chinese food, and hang out in the same places. Unfortunately, Lea is aloof, Gabe is shy, and it looks like things are never going to work out. But everyone can see something is happening between them. The bus driver tells his wife about them. The waitress at the diner automatically seats them together. Even the squirrel on the college green believes Lea and Gabe were meant to be together.

A Blade So Black by L.L. McKinney

The first time the Nightmares came, it nearly cost Alice her life. Now she battles monstrous creatures in the dark dream realm known as Wonderland. Yet life in real-world Atlanta isn’t always so simple as Alice juggles an overprotective mom, a high-maintenance best friend, and a slipping GPA. Keeping the Nightmares at bay is turning into a full-time job. But when Alice’s handsome and mysterious mentor is poisoned, she has to find the antidote by venturing deeper into Wonderland than she’s ever gone before.

The Astonishing Color of After by Emily X.R. Pan

Leigh Chen Sanders is absolutely certain about one thing: When her mother died by suicide, she turned into a bird. Leigh travels to Taiwan to meet her maternal grandparents for the first time and to find her mother, the bird. In her search, she winds up chasing after ghosts, uncovering family secrets, and forging a new relationship with her grandparents. And as she grieves, she must try to reconcile the fact that on the same day she kissed her best friend and longtime secret crush, Axel, her mother was taking her own life.

The Beautiful Land by Alan Averill

Takahiro O’Leary has a special job working for the Axon Corporation as an explorer of parallel timelines. A great gig—until information he brought back gave Axon the means to maximize profits by changing the past, present, and future of this world. If Axon succeeds, Tak will lose Samira Moheb, the woman he has loved since high school—because her future will cease to exist. The inventor of the device Tak ”borrowed” to save Sam is searching for a timeline called the Beautiful Land—and he intends to destroy every other possible present and future to find it.

The Wedding Date by Jasmine Guillory

Agreeing to go to a wedding with a guy she gets stuck with in an elevator is something Alexa Monroe wouldn’t normally do. But there’s something about Drew Nichols that’s too hard to resist. After Alexa and Drew have more fun than they ever thought possible, Drew has to fly back to Los Angeles and his job as a pediatric surgeon, and Alexa heads home to Berkeley, where she’s the mayor’s chief of staff. Too bad they can’t stop thinking about the other….

In a ruined and toxic future, a community exists in a giant silo underground, hundreds of stories deep. There, men and women live in a society full of regulations they believe are meant to protect them. Sheriff Holston, who has upheld the silo’s rules for years, unexpectedly breaks the greatest taboo of all: He asks to go outside. An unlikely candidate is appointed to replace him: Juliette, a mechanic with no training in law. The silo is about to confront what its history has only hinted about and its inhabitants have never dared to whisper. Uprising.

On a cold spring night in 1952, a huge meteorite fell to earth and obliterated much of the east coast of the United States. The ensuing climate cataclysm will soon render the earth inhospitable for humanity. Elma York’s experience as a WASP pilot and mathematician earns her a place in the International Aerospace Coalition’s accelerated attempts to colonize space. But with so many skilled women pilots and scientists in the program, it doesn’t take long before Elma begins to wonder why women can’t go into space, too.

Trail of Lightning by Rebecca Roanhorse

Maggie Hoskie is a Dinétah monster hunter, a supernaturally gifted killer. When a small town needs help finding a missing girl, Maggie is their last best hope. Maggie reluctantly enlists the aid of Kai Arviso, an unconventional medicine man, and together they travel the rez, unraveling clues from ancient legends, trading favors with tricksters, and battling dark witchcraft in a patchwork world of deteriorating technology.

Book descriptions taken from the publisher.