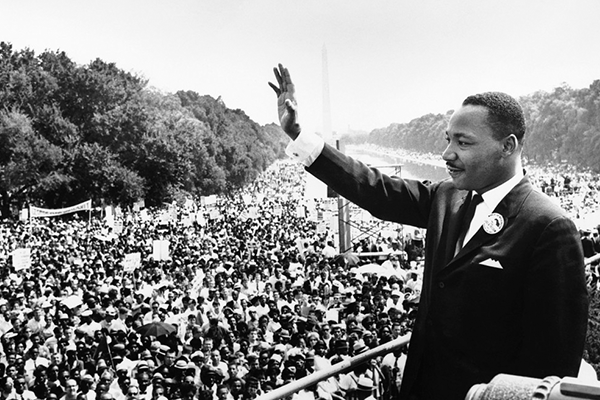 Who was Martin Luther King Jr.?

Martin Luther King, Jr., was a Baptist minister and a leader of the American civil rights movement in the 1950s and 1960s. He was awarded his Ph.D. degree from Boston University in 1955 in Systematic Theology. Also in 1955, King became involved in his first major civil rights campaign in Montgomery, Alabama, where buses were racially segregated. He used the face of Rosa Parks in his campaign that encouraged all African Americans in the Montgomery community to boycott city transportation. In 1957 Dr. King and other African American civil rights activists formed the Southern Christian Leadership Conference (SCLC), who focused on organizing the power of black churches to conduct non-violent protests for civil rights reform.

He led the March on Washington in 1963 as one of the “Big Six”  organizers. His protests helped to win important rights for African Americans, demanding political and economic justice for all Americans. This is where he delivered his famous “I Have a Dream” speech. The success of the march led to the passage of civil right legislation, the Civil Rights Act of 1964 and the National Voting Rights Act of 1965. He won the Nobel Peace Prize in 1964 for his exceptional leadership skills in the principles of peace, nonviolence and direct action, and, at that time, was the youngest person to have done so. He continued his fight for civil rights by leading marches, writing books, and organizing campaigns. That came to an end on April 4, 1968, when King was assassinated on the balcony of his hotel room in Memphis, Tennessee.

How is MLK day celebrated?

This day was established to honor the legacy of Dr. Martin Luther King Jr. The day is to be observed as “a day on, not a day off” to encourage Americans to volunteer in order to improve their communities. The undertaking of volunteer efforts is known as MLK Day of Service.

When is MLK Day?

Martin Luther King, Jr., Day is celebrated on the third Monday in January in the United States. This year, it takes place on January 18, 2021. It takes place as the observance of his birthday on January 15th.

What are available resources at the Library?

The dream : Martin Luther King, Jr., and the speech that inspired a nation
by Hansen, Drew W.

An act of state : the execution of Martin Luther King
by Pepper, William

To the promised land : Martin Luther King and the fight for economic justice
by Honey, Michael K.

The Library has a great deal of other resources, including children’s books, OverDrive/Libby eBooks, and videos through Kanopy. Log into your favorite media and explore all we have to offer.

Aimee is our UX and Trainer, but not the type that makes you skinny or buff. She has been a trainer for nearly 15 years, with a focus in technology. She is also a coffee-drinker, audiobook addict, mom, and cat collector. Much of her spare time is spent in a gym watching volleyball. She escapes to a beach or pool whenever she can. She is also a soup making champion as she has won the library’s soup-off competition two years in a row!