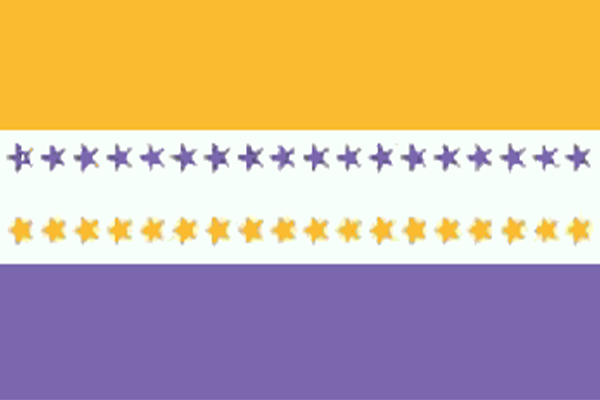 On January 16, 1920, Indiana became the 26th state to ratify the 19th Amendment, granting women the right to vote, which went into effect in Indiana on August 26, 1920, just eight days after the two-thirds majority for ratification had been achieved.

On August 19, 2020, the Library kicked off our celebration of the anniversary of the 19th Amendment with a Barn Quilt Painting Workshop at Luhr Park. Suzi Parron, the author of two books on barn quilts across America, highlighted the women’s suffrage centennial starting with “What does suffrage actually mean?” According to Merriam-Webster Dictionary, “suffrage” has been used since the 14th century to mean “prayer,” especially a prayer requesting divine help or intercession, a fitting word to describe women’s work towards the right to vote. The word suffrage derives from the word’s Latin ancestry, suffragium, which can be translated as “vote,” “support,” or “prayer.”

Featured quilt patterns included the Courthouse Steps (where women’s right to vote was decided), as well as the Sunflower and the Bluebird both of which were adopted as suffrage symbols by various states during the campaigns. 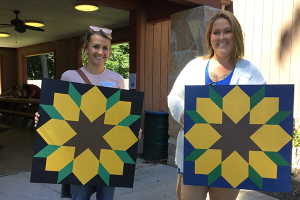 Colors also held significance. Gold was used by Elizabeth Cady Staton and Susan B. Anthony on their sashes. The Suffrage movement chose purple (for dignity) and white (for purity) as the colors of their flag. Green, white, and purple were also used with green representing hope. 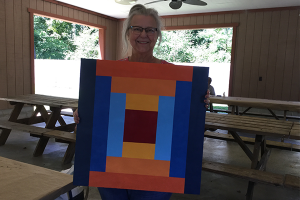 On October 1 listen to the next episode of the library’s podcast Dewey?, Don’t We? This episode features Hoosier author Jessica D. Jenkins, Director of Collection at Minnetrista located in Muncie, Indiana. She will be discussing her new book titled, Exploring Women’s Suffrage through 50 Historic Treasures.

Join us in continuing the celebration of Indiana Women’s Suffrage Centennial on Tuesday, October 6 as Einav Rabinovitch-Fox, Visiting Assistant Professor in History at Case Western Reserve University, helps us explore the connection between fashion, politics, and modernity.

Then stop to view the traveling exhibit Securing the Vote: Women’s Suffrage in Indiana on display at the Main location of the La Porte County Public Library from October 2 through November 3. The exhibit consists of nine seven-foot-tall panels and explores how women all across Indiana passionately labored for suffrage through countless meetings, campaigns, and other grassroots efforts.