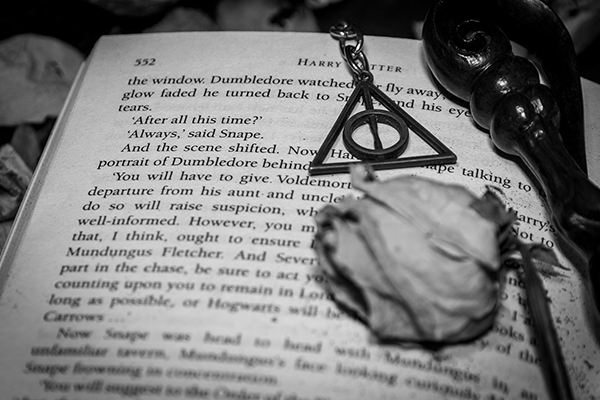 July 31st is Harry Potter’s birthday! If you can’t get enough Harry Potter, don’t worry! The library has the whole series in print, eBook, eAudiobook, and books on CD. Of course, we also have all the movies on DVD as well. Needless to say, there’s plenty of ways to enjoy the story of the world’s most famous teenage wizard! That being said, if you love Harry Potter but have just binged through the series and still want more, we’ve got you covered too. Check out these similar series below to keep the magic going! You can find all of these series in our catalog!

For children and teens:

Children of the Red King Series by Jenny Nimmo

This series follows Charlie Bone, a boy who is a descendant of the Red King. These descendents all have a magic ability, and Charlie has a very rare ability: he can hear people in pictures talk. His aunts send him to the secretive Bloor’s Academy for the descendants of the Red King to discover hidden secrets and survive the danger there. Try this if you’re looking for a series set at a magic boarding school that has battles of good and evil. (Available on ebook only).

On the night he is born, Septimus Heap, seventh son of a seventh son, is declared dead and disappears. That same night, his family finds an abandoned baby girl in the snow. Ten years later, it seems the young girl, Jenna, has her own incredible destiny and Septimus may or may not be dead after all. If you enjoyed the worldbuilding and villains of Harry Potter, try this one.

Sunny Nwazue doesn’t seem to fit in anywhere in her Nigerian community. But then she discovers she has magic. As she studies to use her newfound magic, the magical authorities task her and three other students with stopping an evil magic user. Read this if you are looking for a story with detailed worldbuilding, high-stakes conflicts and an unknowing protagonist thrust into the magical world.

The Magicians Series by Lev Grossman

Quentin Coldwater is a miserable prospective college student who is obsessed with a fictional children’s book series called Fillory. His life is changed when he is unexpectedly admitted into a secret college that teaches magic. Although fantastical, magic is dangerous, and Quentin is soon disillusioned and getting into trouble. This disillusionment only continues as he starts to discover the disturbing secrets behind Fillory. For those looking for a different, darker take on magicians and the idea of a magical school, this adult series is a great place to start.

A Darker Shade of Magic Series by Victoria Schwab

Kell is a magician/smuggler who can travel between parallel Londons: Red London, rich in magic, White London, where magic is fought over, and Grey London, which has none. Not everyone can do what he does, and soon he finds himself in trouble after getting involved in a bad deal. Now, he and a mysterious thief named Deliliah are on the run, and all of the Londons are at risk. This is a good adult series for those that enjoyed the magical and real worlds both separating and mixing together in Harry Potter.