Books to Make You Laugh 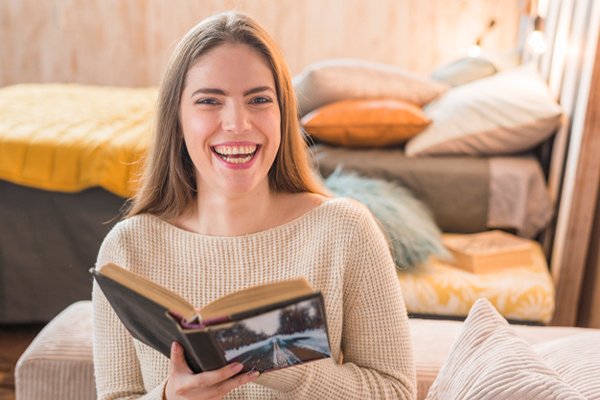 Sometimes, we could all use a laugh. If you are looking for something to make you crack up, we have some recommendations for funny adult-oriented books that you might like! These books are all available through our library, and almost all of them have an eBook or eAudiobook version (or both) through our Libby and Overdrive apps, which you can download here.

If you like ridiculous fantasy and social commentary, look no further than Terry Pratchett’s Discworld series. Consisting of over 40 books with multiple storylines and the occasional stand-alone story, these books are a perfect blend of laugh out loud absurdity and critiques on modern society. The first book in the series is The Color of Magic, featuring an incompetent and easily-terrified wizard named Rincewind who has the misfortune of becoming the unwilling guide to the Discworld’s first ever tourist.

If you’ve already read the Discworld series but want to read something similar, Hitchhiker’s Guide to the Galaxy series by Douglas Adams is equally funny and has just as much ridiculousness and social commentary. Or try to Kill the Farm Boy by Delilah S. Dawson, a fantasy book where a quest to rescue a princess doesn’t go as planned. It is the first book in the Tales of Pell series.

You really can’t go wrong with a comedian’s autobiography. While comedy is subjective, there is a pretty good chance that a comedian you like has written an autobiography that will make you laugh out loud and even occasionally ponder the world. Mindy Kaling has made a name for herself in the comedy world for a good reason, and her memoir shows off her brand of humor spectacularly.

Take a look at these other comedian autobiographies available in print and digitally at LPCPL: Born a Crime by Trevor Noah; Believe Me: A Memoir of Love, Death, and Jazz Chickens by Eddie Izzard; Me Talk Pretty One Day by David Sedaris; If You Ask Me (And Of Course You Won’t) by Betty White; Dear Girls by Ali Wong.

3) Hyperbole and a Half by Allie Brosh (Physical copy only)

This autobiographical comic is laugh-out-loud funny. The author takes her experiences with things like clinical depression, being a dysfunctional adult, and testing her (very dumb) dog’s IQ and turns them into comedy gold in this anthology of real-life stories. The simple drawings add even more laughs and you may even recognize some of them from memes floating around the internet.

For those who are literarily inclined, or even just want to finally read some of the classics, this book is hailed as one of the funniest among literary critics. “Set in the closing months of World War II in an American bomber squadron off the coast of Italy, Catch-22 is the story of a bombardier named Yossarian who is frantic and furious because thousands of people he has never even met keep trying to kill him.”

If you’d rather read a different funny classic, try A Confederacy of Dunces by John Kennedy Toole, a story about a 30-something year old in New Orleans who’s quest to find a job after several misfortunes is punctuated by colorful characters and social commentary.

What do you do when you are a failed writer who gets invited to your ex-boyfriend’s wedding? You accept every single writing event invitation you have been putting off, meaning you can’t possibly go to the wedding because you’re busy traipsing across the world. That is exactly what the main character, Arthur Less, does in this Pulitzer Prize-winning book.

For a similar read, try Honestly, We Meant Well by Grant Ginder, a story about a professor who discovers her husband has been unfaithful and that her son may have ruined his life, so they go on a month-long family trip to Greece.

6) The Princess Bride by William Goldman

This is the book the iconic movie of the same name was based on. The adventurous love story of Princess Buttercup and Wesley is just as funny and quotable in book form.

7) Dear Bob and Sue: One Couple’s Journey Through the National Parks by Matt Smith (Physical copy only)

At 58, Matt and his wife Karen take a break from their careers to tour every single national park in the U.S. On the way they recount their adventures to their friends Bob and Sue through a series of emails that tell of the awe-inspiring scenery and the unexpected, often funny things seen along the way. This book is perfect for when you are cooped up inside and want to cure your cabin fever.

If you are in the mood for more funny armchair travel, try Notes from a Small Island by Bill Bryson (available as an eBook through LPCPL), which tells of the author’s last tour through England before returning to America.

If you want a thrilling mystery that also makes you laugh, give this series a try. Janet Evanovich’s best selling Stephanie Plum series is a high-action, high-suspense about a Stephanie Plum, a bounty hunter in New Jersey. The first book is called “One for the Money.”

If you’ve already read this series but want something similar, try the Heather Wells Mysteries series by Meg Cabot about a sassy former pop-star turned amateur detective in New York. The first book is “Size 12 is Not Fat.”

9) The Unhoneymooners by Christina Lauren

If you want some romance with a slice of laughter, try this enemies-to-lovers romantic comedy! Olive Torres is the unlucky twin. Nothing ever goes her way. But when her (lucky) twin sister gets married, the entire wedding party gets food poisoning except for Olive and the man she hates. Now Olive is going on the honeymoon her sister was supposed to go on with someone she can’t stand. What could possibly go wrong on a romantic island getaway with an attractive man?

If you like this book and want something similar, try Wedding Night by Sophie Kinsella, about a man and a woman who pledged to marry each other if they were still single in their thirties. Well, that time has come, but when they announce their plans to their families, their families try their very best to intervene before the ceremony.

10) Nothing to See Here  by Kevin Wilson

For a dash of funny, quirky, heartfelt weirdness, check out this title. When Lillian’s old friend Madison contacts her out of the blue to ask for her help caring for her two new stepchildren, Lillian agrees. However, Madison’s new stepchildren have a small problem: they spontaneously combust when they get upset.

If you want something similarly quirky and heartwarming to this title but without the supernatural element, check out Eleanor Oliphant is Completely Fine by Gail Honeyman. When socially awkward and routine-oriented Eleanor and the office IT guy, Raymond, save an elderly man named Sammy after he falls on the sidewalk, the three strike up a friendship that saves them all.