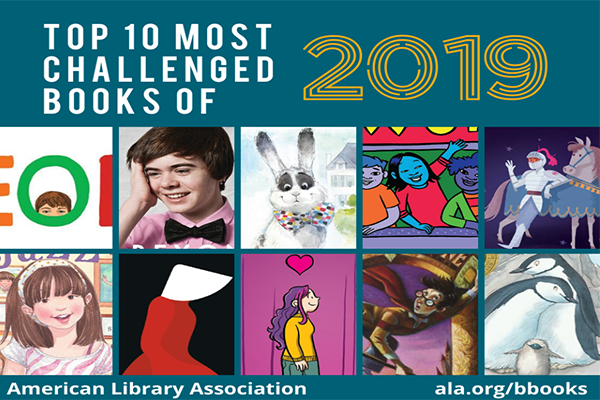 If you’ve ever visited the library in the last week of September, I’m sure you’re familiar with Banned Books Week. Every year, libraries across the country celebrate the right to read any book without fear of censorship or retaliation. It’s one of the great things about being an American; in libraries, we call it intellectual freedom.

However, every year, books are still being censored, challenged, and banned from libraries. There are, of course, the usual suspects: 1984, Catcher in the Rye, The Great Gatsby, Grapes of Wrath, and To Kill a Mockingbird, but some of the newer titles which are challenged may surprise you.

Beyond Magenta: Transgender Teens Speak Out by Susan Kuklin

A Day in the Life of Marlon Bundo by Jill Twiss, illustrated by EG Keller

Sex is a Funny Word by Cory Silverberg, illustrated by Fiona Smyth

I Am Jazz by Jessica Herthel and Jazz Jennings, illustrated by Shelagh McNicholas

The Handmaid’s Tale by Margaret Atwood

Banned Books Week was originally launched in the 1980s, during a time of increased book challenges, protests, and the Island Trees School District v. Pico (1982) Supreme Court case, ruling that school officials cannot ban books in libraries based on content. The marketing initiative was led by Judith F. Krug and has been carried on by libraries ever since to promote intellectual freedom.

If you have any questions about Banned Books Week, or would like to find out more about how you can get involved, check out the American Library Association’s Banned Books Week advocacy page or ask about it at any library location!

Check out the American Library Association’s frequently challenged books lists to learn more about what books have been challenged in the past.