The history of what is now known as La Porte County Public Library goes back to 1856 when the McClure’s Workingman’s Institute (sometimes known as Working Man’s Library or McClure’s Library) was established with a grant. 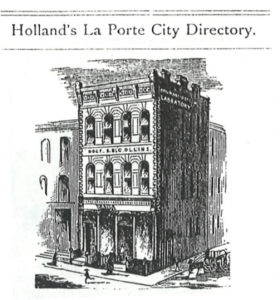 In 1863, this library merged with the new Library and Natural History Association. In 1871, the library moved to the third floor of the S. B. Collins building. In 1876, the City and County of La Porte Library Association was formed.  Land was purchased for a new library at 805 Maple Avenue in La Porte. In 1887, the School Board of Education took over running the library. In 1896, the remaining funds of the Library and Natural History Association were used to expand the Maple Avenue location to include a second floor and wings on each side.  In 1916, the School Board won a $27,500 appropriation from the Carnegie Corporation for a new library. Construction began in 1919 at 904 Indiana Ave., formerly the building and tennis court for the Young Women’s Christian Association (YWCA). The new building for La Porte Public Library was opened on November 6, 1920, but was not completed until January 28, 1921, when the balcony and stairs along with shelves and bookcases near the stairs were installed. 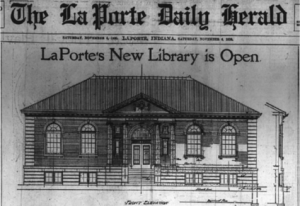 In 1935, the first library in Hanna was organized by members of the local Culture Club.  In 1939, the La Porte County Library was established, a separate library from La Porte Public Library.  Mobile library services started in 1940. In 1956, the Union Mills Library was founded by the Federated Women’s Club.  It became a branch of the La Porte County Library in 1957. Also in 1957, the Rolling Prairie Library opened on Depot Street in a building renovated by the Lions and Lionettes organizations.  In 1959, La Porte Public Library developed its own board and ceased being directed by the school board. In 1962, the Kingsford Heights Library was established and run by the Boys Club in a house next to the elementary school.  In 1965, an update to the Main Library was completed. In 1966, the Hanna Library became a branch of the the La Porte County Library. In 1976, the Fish Lake Branch opened to the public in the former First Merchants Bank building.  In 1979, the Friends of the Library was organized to raise funds and sponsor library programs. In 1980, the Rolling Prairie Library opened for business in the former Methodist Church after volunteers had a painting party there. In 1981, the La Porte Public Library and La Porte County Library merged and became La Porte County Public Library.  In 1985, the Coolspring Branch opened in a new building. In 1989, the Hanna Branch moved to a former bank location. In 1991, the Main Library had an open house for its extensive renovation and expansion project that added space to the north, south and west sides of its building. In 1993, a new Kingsford Heights Branch was built next to the old one and the former building was removed for the parking lot.  Also in 1993, a new Union Mills Branch was built. In 2017, the Main Library reopened after being closed for a ten-month renovation. Also in 2017, the Coolspring, Fish Lake, Hanna and Rolling Prairie Branches received new buildings; the Kingsford Heights and Union Mills Branches received interior makeovers; and the mobile library re-located to the Rolling Prairie Branch. 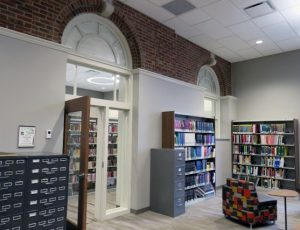 In a nutshell, in the 1800s, library services included books, newspapers, magazines, literary lectures and discussions, and one building.  Now, in addition, there are digital collections; maker space; Play, Grow, Read Rooms; meeting and study rooms; interlibrary loans; outreach deliveries; notary publics; faxing; copying; scanning; computers; wi-fi; classes; seven buildings; one mobile library; and plans for a mobile classroom and expansion of the Main Library into a nearby building at 807 Indiana Ave.

Sources:  Before, During and After 805 Maple by Fern Eddy Schultz, Herald-Argus articles, La Porte City Directories, and staff archives.