A Century of Innovation and Growth 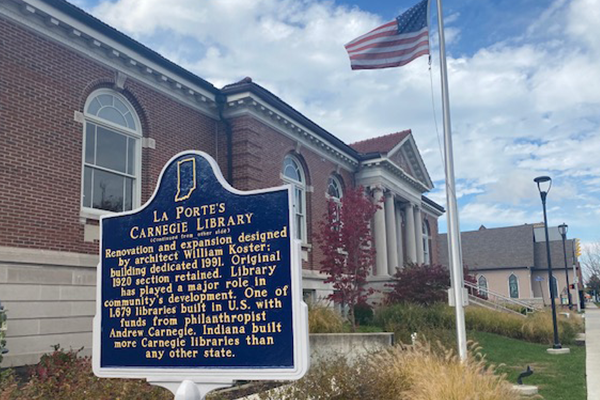 The history of La Porte County Public Library goes all the way back to 1856 when the McClure’s Workingman’s Institute was established with a grant. Following this important first step is a lengthy list of changes, including an 1871 move to the third floor of the S.B. Collins building, an 1876 purchase of land at 805 Maple Avenue, an 1887 expansion of that space, and finally, the 1916 funding from the Carnegie Corporation that allowed the La Porte Public Library to be built at 904 Indiana Avenue. The building was opened on November 6, 1920 (100 years ago!) and was completed in January of 1921, but the legacy of a library hardly ends with its building.

Andrew Carnegie believed that anyone with access to books and a desire to learn could be successful. He spent more than $55 million of his own wealth on libraries alone, including the $27,500 that built the La Porte Public Library. Even at that time, expansion of the library was necessary, and his award made that possible.

Over the years, new locations would be added or gained to eventually become what we now know as the La Porte County Public Library. Renovations, new buildings, and new services have been consistent over the last century in response to the needs of the community. In the 1800s, libraries were a place for books, magazines, newspapers, and literary lectures or discussions. Now, libraries are that and so much more. Carnegie wanted libraries to provide access to information and learning to their communities, and they continue to do so by adapting to new technologies, providing internet access, loaning technology, providing meeting space, and partnering with schools or community groups.

As we cross the century threshold, it’s exciting to look forward. La Porte County Public Library has been growing and changing since its inception, and that next 100 years will be no different. As we open the LPCPL Exchange: Connecting People and Ideas, in 2021, we will be continuing the legacy championed by Carnegie.

The Library will continue to connect the community to opportunities, information, and skills in a way that we couldn’t without this new space. The Exchange will offer classes, workshops, and a chance to learn for those who are interested. Library locations will continue to offer Play, Grow, Read! spaces, storytimes, crafts, and other events to engage the community. Library services are here to help you, as they have been for more than a century and will be for the foreseeable future.

Visit LaPorteLibrary.org to learn more about the library’s history, Exchange renovation, and the services we offer.

Kristi wants to live in a world filled with sea glass-covered beaches and Great Danes. As a professional with more than 6 years of marketing experience at the library, she’s been put to the test on a regular basis to create innovative and thoughtful marketing materials and campaigns. She is a big proponent for “Bring Your Dog To Work Day”, however, the administration doesn’t seem to be as enthusiastic.