5 Books for Teens that Adults Will Love 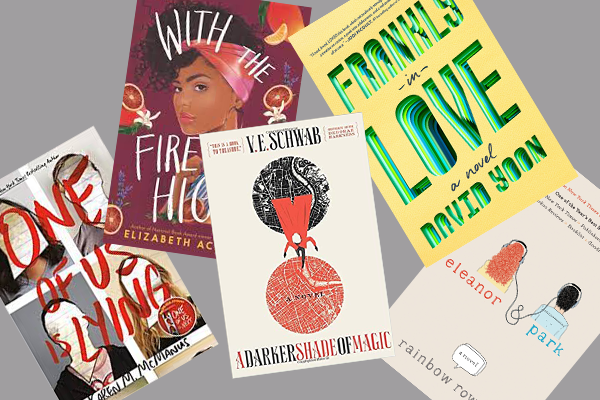 According to Publisher’s Weekly, young adult (YA) novel readership is increasing among adults over the age of 18. In fact, here at the La Porte County Public Library, YA eBooks compete with steamy romance for top checkouts in Libby/Overdrive. This may seem surprising at first glance, but there are a ton of great reasons why adults enjoy YA novels.

For one, the stories tend to be more diverse, including characters from varying backgrounds and life experiences. #OwnVoices titles are seeing huge popularity, and it’s easier than ever to find a protagonist you identify with. Young (and not so young) adults are drawn to stories of characters being stuck in that awkward place between childhood and adulthood. These ‘coming of age’ titles have always held popularity, but the contemporary settings and challenges in new YA are easier to identify with than traditional adult fiction.

Another draw is the massive amount of fantasy novels published within the YA category. YA fantasy often includes more relatable characters and natural language than adult fantasy. These titles are always being adapted into films and TV series because of their whimsical charm. Think Harry Potter, Twilight, and the Hunger Games just to name a few.

But don’t take our word on how great YA novels can be, check out these fantastic books for yourself!

One of Us Is Lying by Karen McManus

On Monday afternoon, five students at Bayview High walk into detention.
Bronwyn, the brain, is Yale-bound and never breaks a rule.
Addy, the beauty, is the picture-perfect homecoming princess.
Nate, the criminal, is already on probation for dealing.
Cooper, the athlete, is the all-star baseball pitcher.
And Simon, the outcast, is the creator of Bayview High’s notorious gossip app.
Only, Simon never makes it out of that classroom. Before the end of detention Simon’s dead. And according to investigators, his death wasn’t an accident.

With the Fire on High by Elizabeth Acevedo

Ever since she got pregnant freshman year, Emoni Santiago’s life has been about making the tough decisions–doing what has to be done for her daughter and her abuela.

The one place she can let all that go is in the kitchen, where she adds a little something magical to everything she cooks, turning her food into straight-up goodness.

Frankly in Love by David Yoon

Frank Li has two names. There’s Frank Li, his American name. Then there’s Sung-Min Li, his Korean name. No one uses his Korean name, not even his parents. Frank barely speaks any Korean. He was born and raised in Southern California.

Even so, his parents still expect him to end up with a nice Korean girl–which is a problem, since Frank is finally dating the girl of his dreams: Brit Means. Brit, who is funny and nerdy just like him. Brit, who makes him laugh like no one else. Brit . . . who is white.

A Darker Shade of Magic by V.E. Schwab

Kell is one of the last Antari — magicians with a rare, coveted ability to travel between parallel Londons; Red, Grey, White, and, once upon a time, Black.

Kell officially serves the Maresh Empire as an ambassador, traveling between the frequent bloody regime changes in White London and the court of George III in the dullest of Londons, the one without any magic left to see.

Unofficially, Kell is a smuggler, servicing people willing to pay for even the smallest glimpses of a world they’ll never see. It’s a defiant hobby with dangerous consequences, which Kell is now seeing firsthand.

Set over the course of one school year in 1986, this is the story of two star-crossed misfits-smart enough to know that first love almost never lasts, but brave and desperate enough to try. When Eleanor meets Park, you’ll remember your own first love-and just how hard it pulled you under.

Book descriptions taken from the publisher.