15 Halloween Books for All Ages 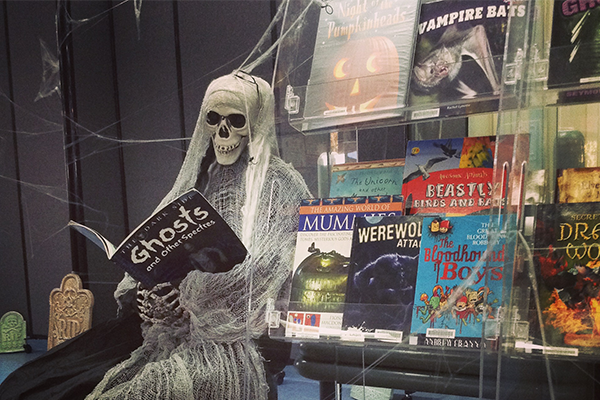 Halloween is a time for stories of horror, magic and monsters. The library is chock full of Halloween movies and books for all ages and all scare levels! To help get you started with your celebrations, we’ve compiled a list of Halloween books for every age. Some are scary, some are sweet, but they can all be found at LPCPL!

When Jose and his brothers throw extra pumpkin seeds into an empty field instead of selling them, the town is overrun by thousands of pumpkins the next fall! That’s too many pumpkins! What is the town going to do with all of them?

Room on the Broom

A friendly witch goes on an adventure when she keeps running into creatures who all want a ride on her broom.

Dragon is very excited for Halloween. He’s excited to dress up in a costume and carve a scary Jack-O-Lantern. But things aren’t going as planned. He can’t find a big pumpkin and he can’t decide which costume to wear. Not to mention that when he goes into the woods, something starts growling!

While trying to help her family, a magic spell goes wrong and Lucely and her best friend Syd accidentally release evil spirits into her town of St. Augustine, Florida. Now they have to work with Lucely’s witch grandmother and her chubby cat to try to put things right!

Can’t get enough scary stories? Check out this anthology containing 13 original ghost stories along with poems and scary illustrations. Perfect for fans of “Scary Stories to Tell in the Dark.”

17 year old Cas roams the country with his mom killing malicious spirits. When he arrives to dispatch a violent ghost the locals have dubbed “Anna Dressed in Blood” she is like nothing he’s dealt with before. Murdered in 1959, she brutally kills everyone who sets foot in her home… except Cas. This book is first in a duology with the sequel being Girl of Nightmares.

Clown in a Cornfield by Adam Cesare

Quinn and her father move to a dying former factory town with rising tensions. The local kids want to leave the town and the adults want to revive it. Tensions are bad enough when the mascot for the town, Frendo the clow, decides to solve the problem. By killing all the kids.

Local kids whisper about a monster in the woods at Sawkill Rock. Girls have been disappearing on the island for decades. When new girl Marion’s sister goes missing soon after a local girl vanishes, she pairs up with 2 other girls to find out the truth. But something sinister lurks in the dark…

Also available as an ebook.

The Bone Houses by Emily Lloyd-Jones

Aderyn and her siblings make a small living by being gravediggers in Colbren, a town once home to the fae. But the dead don’t always stay dead in this town, and the risen corpses are known as “bone houses,” said to be the result of a curse. But when Ellis, an apprentice mapmaker, comes to town, the bone houses become even more frequent and violent than usual. It becomes up to Aderyn and Ellis to uncover the curse and end it.

Also available as an ebook, and eaudiobook.

Teenage witch Nova teams up with her werewolf crush Tam to stop the evil forces attempting to get Tam’s power for their own. As they work to defeat the powerful demon hunting Tam, romantic sparks start to fly. This graphic novel is for those looking for something less bone chilling and more sweet.

Home Before Dark by Riley Sager

Maggie Holt was involved in a real life “Paranormal Activity”, at least according to her father who wrote an explosively popular book about the family’s harrowing experiences in the haunted house. But Maggie was too young to remember any of it and thinks it never actually happened. When she inherits the infamous victorian estate in question and begins to restore it for resale, strange things start happening in the house and she starts to wonder if her father was telling the truth all these years.

Also available as an ebook.

What happens to the girl who survives, covered in blood, at the end of the slasher movie? The answer is group therapy. Lynnette is a real life “final girl” and meets with other women who have gone through similar experiences. When one of the women fails to show up to a meeting, it soon becomes clear that a killer is once again haunting the girls. This love letter to slasher films of the 80s is just as gory as the movies that inspired it.

Debutante Naomi arrives at a distant house in the Mexican countryside after receiving a distressing letter from her newly-wed cousin. But this house has secrets. Her cousin’s new husband is intimidating and attractive, and his father, the patriarch of the house, has taken a strange interest in her. She is not sure who she can trust, or if she can even leave, especially when she starts dreaming of visions of violence and doom.

In 1977, a group of teen detectives and a dog solve their last and most famous mystery: a man in a monster mask trying to get the treasure hidden in the local old mansion. By 1990, those kids have grown up and apart, but questions about what they saw that night still linger. Some things definitely can’t be explained away by a greedy man in a mask. One of the original sleuths gets the scattered band back together to discover the truth, no matter how weird.

The Ballad of Black Tom by Victor D. LaValle

In Jazz age New York City, Charles Thomas Tester hustles to survive. But when he takes a job delivering a occult book to a sorceress in queens, he quickly gets in over his head. Magic is dark and dangerous, and Tom has caught some very unwanted attention from the things of nightmares.